Visiting the Home of the Premier League – BoredTravel.com
Skip to content 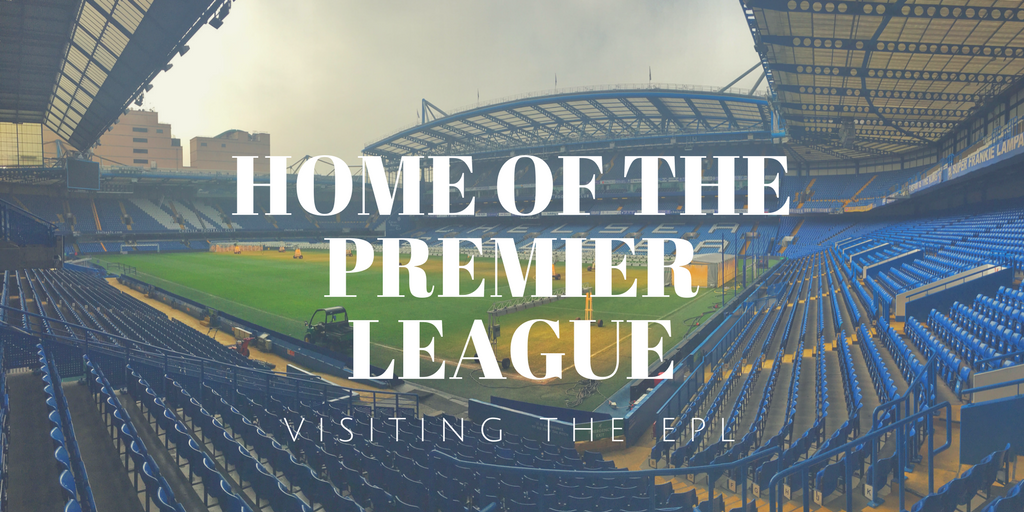 Sports and travel have always gone together for me. Attending the Super Bowl, World Cup, and visiting every Major League Baseball stadium have all played major roles in traveling around the U.S. and the world. I still have a few MLB stadiums left to see but that hasn’t stopped me from setting the new travel goal of seeing every English Premier League park.

I’ve always enjoyed soccer but it’s lack of popularity in the U.S. was the main reason I never followed a team closely growing up. In recent years MLS has grown up a lot and the U.S. Men’s National Team has shown they can compete on the world stage. When I became an Everton fan my passion for soccer grew into what it is today. Watching world class soccer on Saturday’s made all the difference and joining the NYC Evertonians to watch the games made it even better. That is when I decided I wanted to visit all of the major Premier League stadiums.

Visiting Every Stadium in the English Premier League

Attending every stadium to host an English Premier League (EPL) match isn’t exactly realistic. There have been 54 different stadiums to host a match and the top 20 teams in the league changes every season. And there are 47 different teams to play in the league since its inception in 1992. Identifying which teams to target on this new stadium quest wasn’t exactly clear but starting with the current top 20 is a good place to start. I could never have visited every MLB stadium since many have been torn down and rebuilt and the same goes for the EPL. However, the biggest difference in the EPL is how the league changes from year to year as the bottom Premier League teams are relegated to the lower league. This complicates visiting every EPL stadium but I had to start somewhere and that meant attending my first game.

Attending the Merseyside Derby at Anfield

As an Everton fan the Merseyside Derby against Liverpool are always the most fun matches of the year to watch. Everton and Liverpool are right next door to each other and this rivalry couldn’t be any bigger. Both clubs are located within the metropolitan county of Merseyside, which explains the name, and can the parks are within eyesight of one another. This was a great introduction to English football. Usually I watch Everton play at Mr. Dennehy’s with the NYC Evertonians in Greenwich Village but this time I was headed to Liverpool to watch them play at Anfield. I planned this match around the Ryder Cup in Scotland in 2014 and it was my first time attending a Premier League game. Sitting in the Everton section at Anfield was an awesome experience.

Red Sox vs. Yankees have nothing on these two clubs. Local Everton supporters were also much kinder than New Yorkers or Bostonians and sold me tickets at face value. That is unheard of for big games in the U.S. The game ended in a 1-1 draw but after seeing my first EPL match in person I was hooked on the atmosphere and fan experience.

Visiting the Home of the Premier League

in 2016 I had another chance to see visit the home of the Premier League and this time planned to stop by a couple more stadiums around England. First stop was the home of Chelsea Football Club at Stamford Bridge. Located in Fulham, London Stamford Bridge was opened in 1877 until Chelsea Football Club was founded and took over the grounds in 1905. If you don’t have time to attend a game here stadium tours area available and offer a great behind the scenes look at Chelsea. 2015-16 was a surprise season for Leicester City which made it a great year to attend a game. Leicester City have been around since 1884 but in 2015-16 they won the Premier League and their first top-level football championship. The stadium tour here was fantastic and really allowed for a close look at the clubhouse and the history of the club. I’ve been trying to attend a match at Goodison for years but it hasn’t worked out. In 2017 I will finally be visiting one of the oldest purpose-built football grounds in the world. The Toffees were founded in 1878 so there is no question there is a lot of history at this club. I can’t wait for this one and hopefully the Blues don’t let me down in person.

I’ll be sharing my EPL journey on Instagram as well as all my other travel photos around the world. Feel free to join me there @triphackr. With only four Premier League stadiums visited so far it looks like a lot more trips to England will be needed in the near future.